PYN REGIONAL WEBINAR The future is now: Modern diplomacy for the 21st century 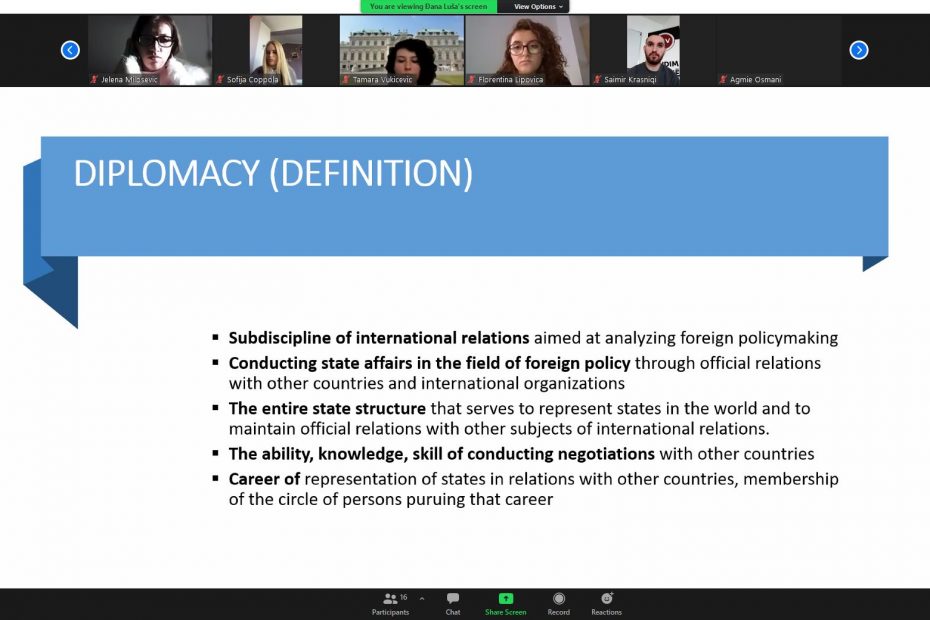 On Tuesday 18 January 2022, yet another Political Youth Network Webinar was successfully held via the Zoom platform! The title of this year’s first webinar was The future is now: Modern diplomacy for the 21st century. In this online interactive webinar young politicians from Croatia, Bosnia and Herzegovina, Kosovo and Montenegro learned to differentiate between the terms such as diplomacy and public diplomacy or diplomatic mission and consulate. They got a short historic overview of the development of diplomacy as a profession throughout the centuries. Also, they gained some basic information about the diplomatic protocol, diplomatic staff and were given a chance to share their thoughts about diplomats having diplomatic immunity. At the very end of the lecture, they also got some information about ways modern diplomacy makes an impact nowadays in international relations, for example sports diplomacy.

Participants were actively participating during the whole webinar. They were giving examples of diplomats they recognize as relevant factors in the diplomacy of the 21st century and discussed the most recent diplomatic affairs that they are familiar with. They voiced their opinions about diplomatic relations between countries and shared the reasons why they would like to become diplomats at some point in their political careers.

The webinar was planned to last 2 hours (120min) but was extended in the end for almost half an hour because of such active participation of young politicians.

The guest lecturer that held this webinar was Đana Luša, Ph.D., associate professor at the Department of International Relations and Security Studies, Faculty of Political Science, University of Zagreb.