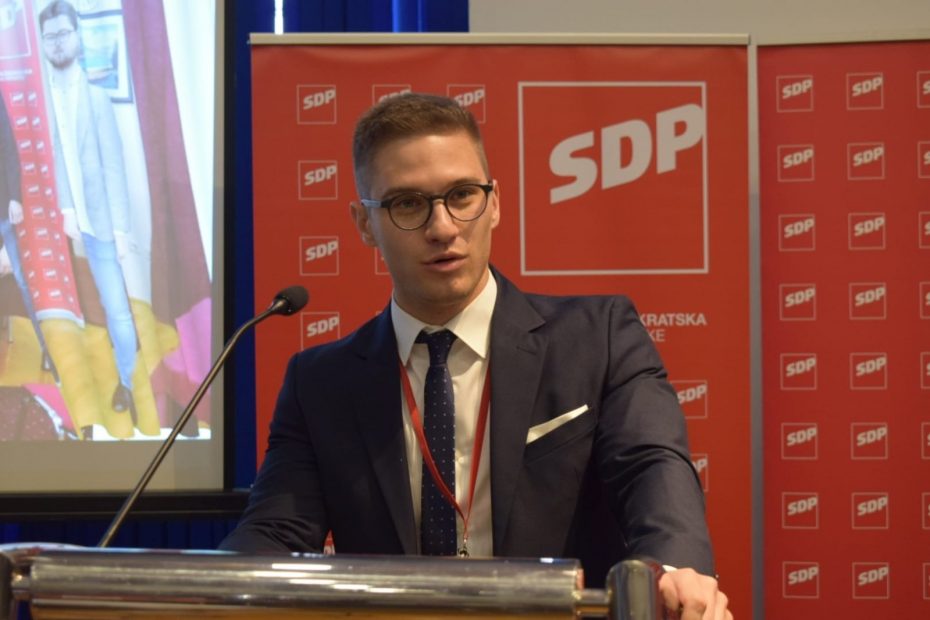 Croatian Social Democratic Youth is among a few organizations that are Political Youth Network members since its foundation in 2014. We are happy to introduce to you their newly elected young president Lovro Lukavečki through this interview!

Dear Lovro, first of all, congratulations! Please tell us some general information about yourself and share with us the dearest memory you have so far from your political career.

My name is Lovro Lukavečki, I have a degree in political science and I am a PhD student in Media and Communication and I am working as a scientific researcher. I come from Varaždin, a city in the north of Croatia, where I am also a member of the City Council and president of the SDP Councilors’ Club. I am a member of the SDP, I am the vice-president of the City Organization of the SDP in Varaždin and the president of the Croatian Social Democratic Youth at a national level. Through my social and political activity, I have initiated a whole series of projects, some of the latest ones being the introduction of free sanitary napkins in Varaždin schools, the employment of additional psychologists in Varaždin schools, and the introduction of participatory budgeting for children and youth.

At what age did you decide to become politically active and why? Describe in short your path from becoming a member of the Croatian Social Democratic Youth to being elected as its president.

What are your future plans for Croatian Social Democratic Youth? In which direction would you like it to go now when it is led by new leadership?

At the moment, we have been focusing on two extremely important things – the analysis of the situation in organizations and the formation of working groups that will create policies for young people. Some of our key priorities are the issue of housing policy for young people, youth health, student work, ecology and green policies, sexual and health education, gender equality and youth participation. Immediately after assuming responsibility for managing the Social Democratic Youth, I said that I wanted us to open up to young people and show inclusiveness. This is precisely why we have issued a public call for inclusion in working groups, regardless of whether they are members of the SDP or the Social Democratic Youth. We have already started public debates and have organized public panel discussions on education and housing policies for young people.

What are the good sides of being a member of international and regional organizations such as Political Youth Network for Croatian Social Democratic Youth? In what way can non-governmental organizations support youth engaged in political parties?

As the new leadership of Croatian Social Democratic Youth, we emphasize connecting with various youth organizations, and in this regard, we especially focus on cooperation with other political youth. Therefore, in this context, we view cooperation within various platforms that connect political youth extremely positively and believe that it can bring us benefits on multiple levels. We also see non-governmental organizations as an extremely important partner in strengthening the advocacy position in society. For example, we have already initiated certain discussions with certain non-governmental organizations regarding the lack of a National Youth Program in Croatia.

Does your organization cooperate with other youth-led political organizations and if yes, in what ways? What is in your opinion a good mechanism to connect youth from the region?

Already in the first months of our leadership, we initiated talks with the political youth of the political parties of the opposition in the Croatian parliament. Our goal was first of all to open up the issue of the lack of a National Youth Program in Croatia, but also the situation in the youth sector in general. Of course, we are primarily focused on parties similar in program and ideology, but we want to discuss some important issues with everyone, because the welfare of young people is our main priority. Regarding the region, we are trying to connect more strongly through the following bodies – the International Secretariat and the International Committee. However, we also strive to continually maintain dialogue through various activities that include conversations and actions within broader platforms that bring together political youth.

How is it for you to also be the youngest member of the city council in Varaždin, your hometown? What are some main achievements you managed to do so far in this role? What would be your message to young people that want to become politically active?

Since the beginning of my political involvement, I have had one very important goal – to show that young people are first and foremost the present, not just the future. The role of city councilor in Varaždin represents a great opportunity to really show that the voice of young people can be heard and that they can be equal stakeholders in the decision-making and policy-making process. In addition to the above-mentioned projects, we also put great emphasis on the creation of a new, broader strategy for young people, on which we work together with young people and which will represent a long-term vision of the city’s development in terms of young people. The drafting of the strategy is nearing completion and I believe that it will bring a new level of seriousness in the approach to youth policies. My message to young people is to stay in Croatia, to believe in themselves and to fight for changes because they are very possible.