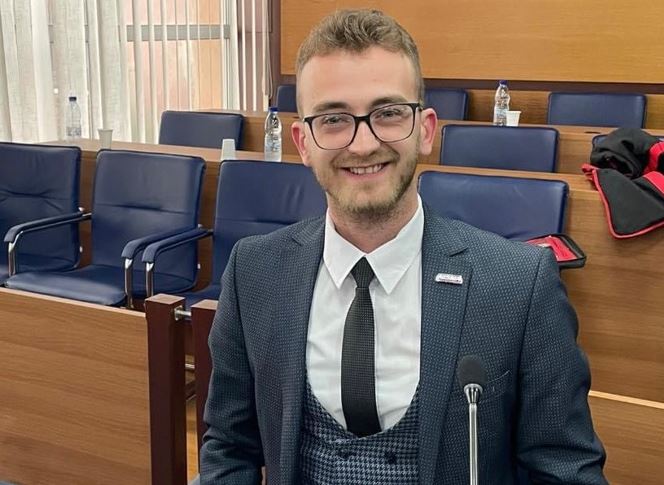 Dear readers, in this interview we are introducing you another new representative that became part of our expanding Political Youth Network. Meet Endrit Zabërgja from The Initiative of Socialdemocratic Youth from Kosovo!

Dear Endrit, please introduce yourself to our readers!

I am Endrit Zabergja, 26 years old, political activist who prefers to call himself “auto-didact”. Active in political structures for 10 years, I remain among the oldest activists of the youth cause in my country, always being active in advocating youth issues.

Knowing the circumstances that my country has gone through, the historical injustices that have brought a lot of suffering and sacrifice, being a child of the war, definitely everyone’s preoccupation during my growing up was the politics and status of Kosovo.
While political activity for me remains the only way to continue contributing to the ideals of freedom, justice and equality.

The reason why I am in politics is because I believe that only through politics my full impact will be felt in society.

Politics has taught me that true spiritual happiness comes from assets that are not spent, from values ​​and right actions where the general good as a goal makes you feel proud of the profession where you can be the cause of the improvement of many lives. Being just in the long-term visions, and not driven by momentary interests, your activity will be appreciated and respected!

Share with us one memory, anecdote, or story from your political experience that you cherish the most.

My most special moment in politics so far is undoubtedly the swearing-in as an assemblyman of the capital’s Municipal Assembly, the solemn day of assuming the official duty as a servant and the voice of the people. Where in every letter that I read, I felt the weight of responsibility that I have not only as an assemblyman but as a young leader, to be dedicated and diligent in the processes of the future.

In the framework of PYN activities, I also participated in the past, when we hosted young people from Serbia in 2016 and in 2018 when we were in Zagreb, while the reason why I think we should join in political networks where the goal is peace and stability, the future will be safer for the region.

Nowadays we are faced with global challenges that require much solidarity and responsibility. What is your desired vision for the region in the next 10 years? What message do you have for young politically active young people in the region?

We are the future, so we must be careful with what ambitions and ideologies we are feeding ourselves. The past has left enough lessons for everyone, so let’s turn the pains of history into the strength of the future, learning from mistakes and not repeating them. Let’s respect the human rights of all by respecting freedom, cultivating equality, and aiming for justice. The Balkan region needs stability, and stability comes with our full integration into the Euro-Atlantic institutions, this is also my dream for the region where every citizen would feel proud of the progress, while I wish that every young activist has inside the democratic and human values ​​as the foundations of their operation, turning politics into alliance and not enmity. I strongly believe that within 10 years the current problems will end with the end of the chauvinist regimes that still exist in our region, and this will happen at the moment when the black sheep changes its hair and Europe opens its arms!