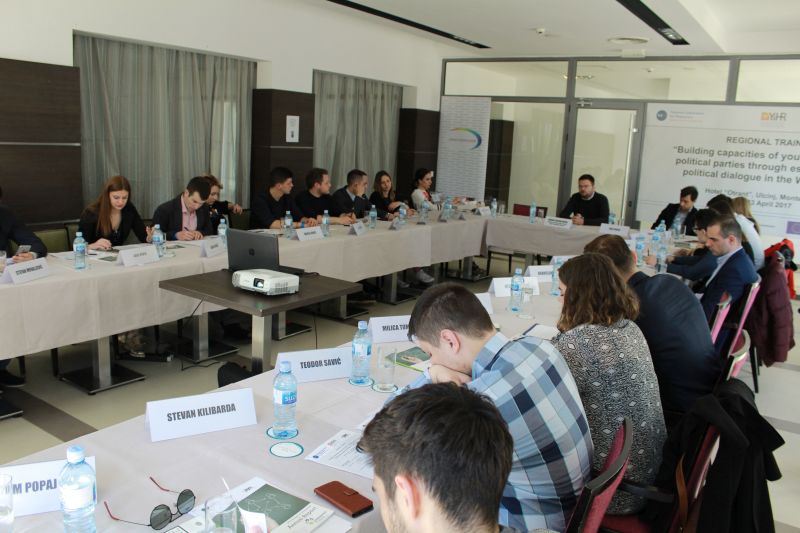 The aim of this training was improving knowledge of young politicians in the field of human rights, transitional justice, practical political skills and political communication as well as encouraging regional cooperation among young people in Western Balkan.

The participants of this training were representatives of political parties’ youth branches from Bosna and Herzegovina, Croatia, Kosovo, Montenegro and Serbia.

After opening speech held by Boris Raonić, Program director of Civic Alliance and Genci Nimanbegu, Deputy Speaker of the Parliament of Montenegro, Goran Lojančić, held an introductory dialogue session about political dialogue as the tool for intervention in social conflicts.

Second day of the program started with  lecture about process of dealing with the past in Montenegro. Lecture was held by journalist and researcher Sead Sadiković. After a short break, the program continued with Vedran Džihić’s lecture about youth as a democratic game changer. Džihić is assistant professor at the Faculty of Political science at the University of Vienna. Third lecture of the second day was held by Zhidas Daskalovski, professor and director of School of Public Policies „Mother Teresa“. The topic was political dialogue in Macedonia.

Third day of the program started with Olivera Komar’s lecture on ideologies and political parties. Komar  is professor at the Faculty of Political Sciences , University of Montenegro. Last lecture was held by His Excellency Rabii Hantouli on topic of possibilities for a dialogue between Israel and Palestine.

Every lecture included active participation of participants, During the evaluation, which was the last part of the program, the participants had the oportunity to share their impressions and suggestions.