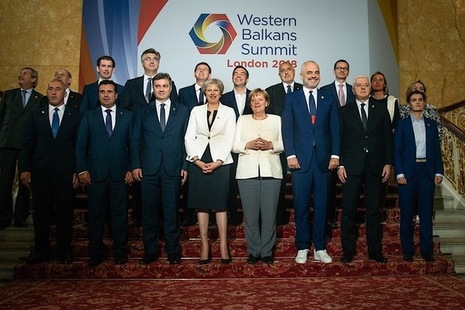 Prime Ministers of Albania, Bosnia and Herzegovina, Kosovo, Macedonia, Montenegro and Serbia met on 10th of July at the fifth Western Balkans Summit in the context of the Berlin Process.

As on previous occasions, leaders of Austria, Germany, Croatia, France, Italy, Slovenia and United Kingdom also participated, as well as numerous representatives of the European Union, including High Representative of the Union for Foreign Affairs and Security Policy. Apart from them, at this year’s Summit Prime Ministers of Poland and Greece also took part, together with Prime Minister of Bulgaria, the country that hosted EU-Western Balkans Summit earlier this year.

This meeting was the final event of the London Summit, which included meetings of Ministers of Foreign Affairs, Minsters of Interior and Security Affairs, as well as Ministers of Economy and Finance. The Summit also included a number of sideline-meetings, such as the one between Prime Ministers of Albania and Greece, Rama and Tsipras, about bilateral issues.

Summit’s host, British Prime Minister Theresa May, stated that history has shown that a secure and stable Western Balkans means a secure and stable Europe. Therefore, she announced an ambitious package of measures aimed at helping the region in achieving collective security, stability and ability to tackle future threats.

May said that her country’s decision to leave the EU did not mean that London would lose its role in the region, reports N1.

German Chancellor Angela Merkel, Berlin Process Initiator, emphasised that from now on the main goal is reinforcing the relations between the countries of the region, which can be achieved through infrastructural projects, economic cooperation as well as youth exchanges.

She added that every host country gave the Process a new dimension.

In the light of that statement, Polish Prime Minister Mateusz Morawiecki, whose country should host the next year’s Summit, said that Poland is ready to share its experiences about the accession process with “our Balkan friends.”

High Representative of the Union Federica Mogherini emphasised that the Western Balkans is moving strongly forward and that it has a strong EU support in its path. “Throughout the years we have worked together on moving this region closer to the EU, in political, economic and security sense. And we have seen significant results, solutions for the most difficult bilateral questions. Western Balkans is moving safely forward. And today we confirm once again that we share the dedication to common future”, she said.

Serbia’s Prime Minister Ana Brnabić highlighted the importance of regional economic growth and lowering of the unemployment rate among young people as well as brain drain, together with strengthening the rule of law and continuing structural reforms.

Prime Minster of Montenegro Duško Marković thanked Prime Minster May for her support in dealing with the challenges to Montenegro’s European and Euro-Atlantic Perspective. He also proposed the founding of Regional Institute for Sustainable Technologies.

Two documents were signed at the meeting, published on the official site of British Government. The first one, Joint Declaration on Regional Cooperation and Good Neighbourly Relations in the Framework of Berlin Process, welcomed the positive development in solving of bilateral disputes.

Participants of the meeting especially congratulated Prime Minsters Zaev and Tsipras on the agreement on the new name of the Republic of North Macedonia, signed last month in Prespa.

“It must be said that the Republic of Macedonia has a special place at this year’s EU Summit on the Western Balkans. With the agreement reached, the Macedonian-Greek name dispute and strategic partnership with Greece, as well as the date for negotiations with the European Union, our country has been recognized as a leader in the region in terms of foreign policy and bilateral issues and heritage from the past”, said Macedonia’s Prime Minster Zoran Zaev.

“The way in which our country closed the open issues with all neighbours is a model for a successful story that welcomed the entire democratic world, and especially our neighbours and our partners in the European Union”, he added.

The second document signed was the Joint Declaration on War Crimes and Missing Persons in the Framework of the Berlin Process. It emphasises the great importance of finding the missing persons at the territory of former Yugoslavia, clarifying the circumstances of their disappearance and bringing those responsible to justice.