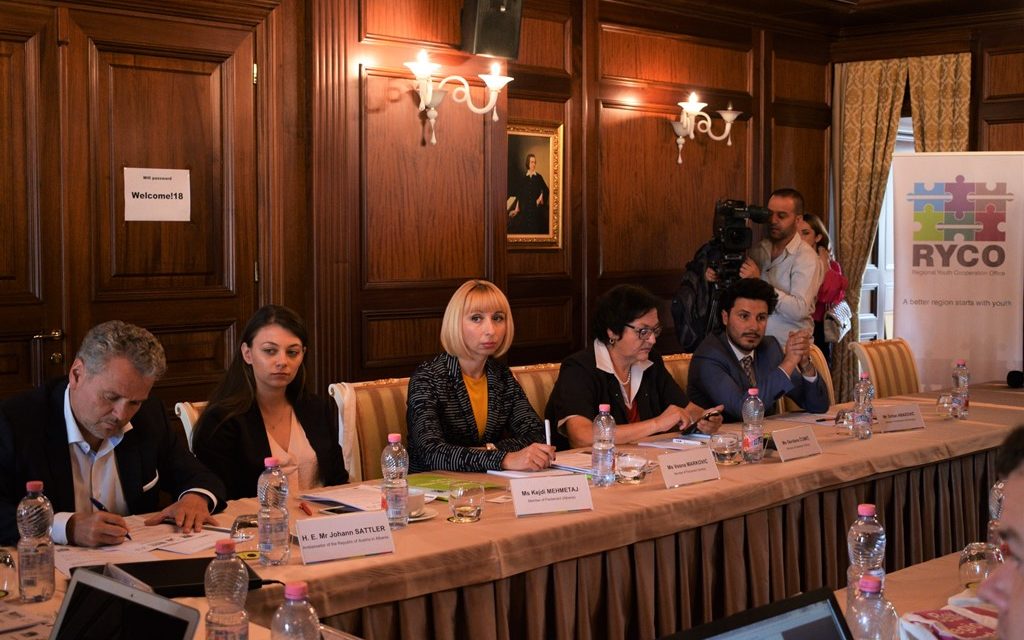 RYCO organized the first meeting of the selected Members of Parliaments (MPs) of the Western Balkans within the program Strengthening Political Support for the Regional Youth Cooperation Office. The event taook place in Tirana from 25 to 27 June 2018.

During the opening panel discussion, after the introductory remarks of RYCO Deputy Secretary General Mr Fatos Mustafa, the MPs presented their work and agreed that the region faces a lot of challenges but that it is important to give a new impetus for the regional cooperation. Moreover, they agreed that RYCO can be a good mechanism for encouraging the Western Balkan institutions and people to network and cooperate.

Ms Vasak said that the European Union and the region face a lot of challenges, but that they should learn from them as the EU learned from crises in the past. She underlined that the EU is facing the decision of the United Kingdom to leave the EU, but also how to engage with the enlargement towards the Western Balkans. She concluded that despite the crises the region evolved and pointed out that the initiatives such as RYCO would be impossible to imagine back in 2003 when the Summit in Thessaloniki took place.

On the other hand, Mr Sattler pointed out that the Balkans is back on the agenda and that it could not be possible without the Berlin Process. He expressed his hopes that the region can catch up with the reforms, especially in the field of digital reforms. Moreover, he underlined that he hopes that RYCO, as the only tangible result of the Berlin Process, will last long after the process ends.

Ms Holstein gave to the participants the reasons why the EU and Germany are working with the region saying that it is in the interests of the region and the EU Member States to make the region more secure and anchored in the EU. She underlined that the Berlin Process contributed to regional cooperation and pointed out that it brought the Prime Ministers of Albania and Serbia at the same table for the first time, but it also made possible that Serbia and Kosovo* are jointly in the initiative such as RYCO.

Parliamentarians from the Western Balkans, together with the representatives of RYCO, diplomats of France, Austria and Germany and civil society representatives from the region will network and exchange on relevant topics and create a unified voice of the Western Balkans for the youth agenda. Additionally, they will aim to identify the meaning of political thinking and acting, as well as available individuals and groups in each of the parliaments for supporting RYCO in its further development.

The MPs participating in the event are Mr Dritan Abazović from Montenegro, Ms Gordana Čomić from Serbia, Ms Kejdi Mehmetaj from Albania, Mr Memli Krasniqi from Kosovo and  Ms Vesna Marković from Serbia.

The event is organized in cooperation with the Franco-German Youth Office (DFJW/OFAJ), Crossborder Factory and Youth Initiative for Human Rights and with the support of the German Federal Foreign Office, French Ministry of Foreign Affairs and the European Commission.

← Talks at the Top with Atifete Jahjaga
→ Voice Within : Handbook for young political leaders on intra-party democracy