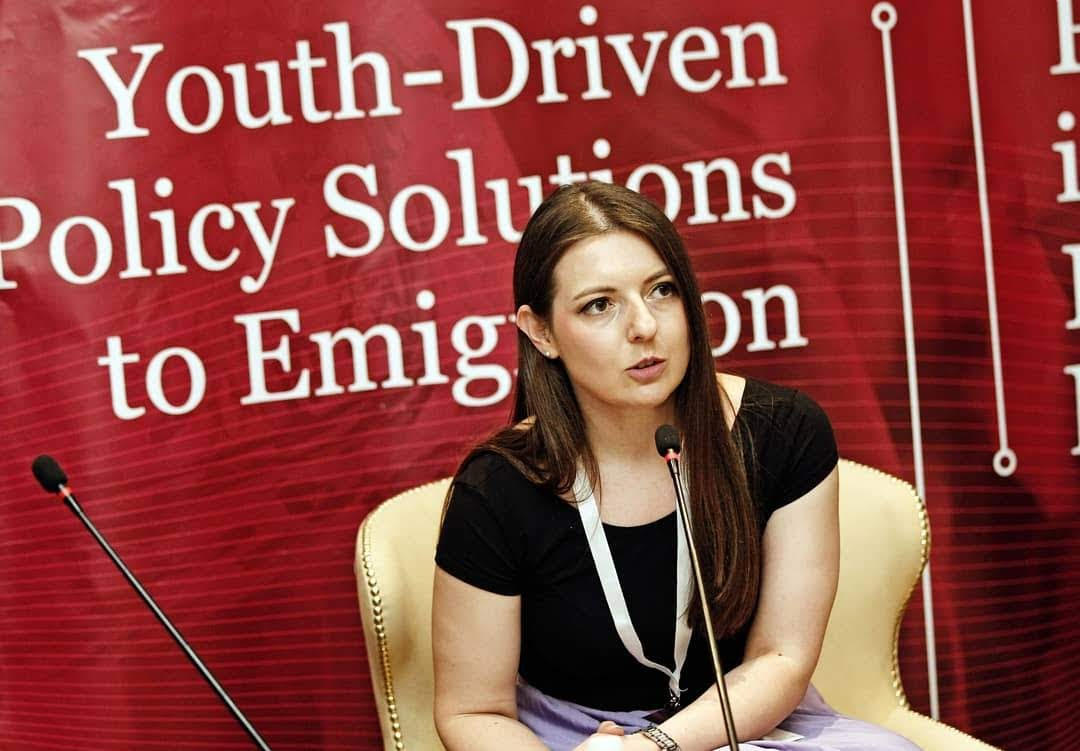 Since its foundation the Political Youth Network has been the meeting point for politically active young people from the region. Every one of them made significant contribution and shaped the network in her or his own way. Let’s hear Irhana’s story!

Dear Irhana, please introduce yourself and share with us your educational and professional background.

I was born in Prozor, a small town in Herzegovina. Due to the war, we were forced to leave our home. That is when my refugee life and the time of constant relocations began. Finally, before the end of the war in 1995, we moved to Bugojno and that is where my “normal” life began. I graduated from primary and secondary school in Bugojno. After that I graduated at the Faculty of Forestry at the University of Sarajevo.

At the Local Elections in 2012 I became a member of the Municipal Council in my hometown.

Dealing with the issues of young people, gender equality and working on strengthening the position of women in society are very important to me. That’s why I’m very committed to programs that deal with these topics. Currently I am the vice-president of the Youth Forum of the SDP BiH and a member of the SDP BiH General Board.

I currently live and work in Sarajevo, the capital of Bosnia and Herzegovina.

I currently live in New Sarajevo, a municipality in the Sarajevo Canton, which is a part of the entity of Federation of Bosnia and Herzegovina, which, then again, is a part of Bosnia and Herzegovina. Seems confusing, I know. It is a country which consists of two entities and an entity consisting of 10 cantons … Long story short, we live in a state which has 13 governments, the same number of prime ministers and hundreds of ministers.

We divided everything that can be divided, kindergartens, schools, universities. I myself graduated at one of those schools, known as “Two schools under one roof”. Students who belong to two different ethnic groups, Bosniaks and Croats, are being educated in the same school building, but are physically separated from each other and most often use a separate entrance to the school building. Bosniaks study according to the federal curriculum, and Croats rely on the curriculum of neighboring country Croatia. In the other entity, Republika Srpska, students are educated according to the third curriculum. All these divisions happen inside of a few thousand square kilometres with three million inhabitants. There are three members of the Presidency and three official languages.

In such a state with those divisions, many things are done impulsively and most citizens are just silent observers. I wanted to be a participant, not an observer. I learned very early that my opinion is important and that every voice counts. That’s how I grew up. Being with my family I didn’t have to fight in order to be heard. But outside of the comfort zone, the situation is different. The burden of the past events is still following us. Unfortunately, we are listening to stories about war, which after ravaging the country in the 1990s, left a bitter taste in the mouth and led to great divisions. That’s why I became politically active. I felt that with my work and activism I was able to make a change.

Nothing is the way it seems to be. Politics brings you so close to other people’s real lives. You realize that you are not that familiar with the things you thought you were very well informed about. You learn how to fight against everything you don’t like in your society. In order to see a change, you have to fight even for human rights that should be guaranteed to everyone in the 21st century. Then, you strengthen up and push yourself above the limits of psychical endurance.

Please, share with us one memory, anecdote or story from your political experience you cherish the most.

In 2012, the morning after the local elections, I was told that I had been elected to the Bugojno Municipal Council. I didn’t believe it. Out of 300 candidates, I was among those 25 who had gained the trust of the citizens. I was also the youngest one. Before I received the official document confirmation, I had been saying “Nothing is certain yet.” This had been going on for a month.

How would you describe your experience with the Political Youth Network’s activities? What does regional cooperation mean to you

In politics, just as in private life, you can achieve little without cooperation. The bigger and wider the cooperation, the bigger and better the results. PYN is a great platform for all those who want to achieve a positive change in their countries. Through PYN activities you see and hear what others are doing, what their problems are, how they solve them and how they face challenges, which are very common in our countries. I am very happy because I had the opportunity to be a part of this story and meet all those great people who are working to improve the quality of all life segments throughout the region.

Freedom, equality and solidarity should not be just a motto, but guaranteed rights to all people in the world. Unfortunately, that is not the case and now more than ever we have to fight to reduce the gap between the rich and the poor, so that everyone has equal access to a quality health care system, because this crisis has shown how important that is. Crises come and go, but they leave huge consequences and it is our duty and responsibility to do everything in our power to mitigate those consequences. For starters, after this crisis, I want a world where borders will only be on paper, not in our heads. I want the economic consequences to be a thing of the past as soon as possible, and that will only happen if we show solidarity and help those affected by the crisis.

I want young people to use their potential and be the driving force of their countries, without prejudice towards differences and diversity. Whoever accepts the differences of our region / world is ready to break down all the barriers that divide us, to change the economic and social image of their countries.

I wish that all of us live in a peaceful and prosperous region and world.

← Meet the Alumni: Interview with Jovana Majstorović
→ Western Balkans in time of COVID-19