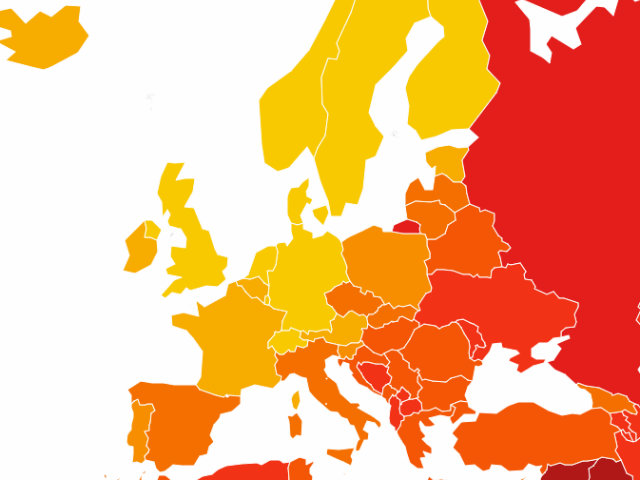 “This connection endangers, or in some cases even suspends to a large extent, the rule of law and the division of power,” Abel said in an interview for BIRN ahead of the publication of Transparency International’s annual global report on perceived corruption.

The 2017 Corruption Perception Index, published on Wednesday, ranks 180 countries and territories by their perceived levels of public-sector corruption according to experts and businesspeople.

It ranks countries from 0 [perceived as highly corrupt] to 100 [perceived as least corrupt]; this year’s results found that more than two-thirds of countries score below 50, with an average score of 43.

The index shows that most Balkan countries’ ratings dropped compared to the previous year, but, according to Abel, this is on the level of “statistical error”.

“From 2016 to 2017 not one of the countries in the region, or anywhere in the world, has had a significant improvement or decrease [in the rating],” Abel said.

According to her, the results measured over a longer period, from 2012 to 2017, show that the Balkan countries have stagnated in this field.

Besides the “capture” of political systems by powerful officials, she cites suppression of independent institutions, non-independent judiciaries and weak law enforcement as the main problems in the Balkans.

Abel named Serbia as an example of a “captured political system”, citing the excessive influence of its President, Aleksandar Vucic.

“Serbia … is becoming a prime example of one person in the position of power influencing everyone else,” she said.

Serbia fell by five places on the Corruption Perception Index, from 72 in 2016 to 77 in 2017, but Abel said the struggle against corruption in Serbia is not making real progress.

She cited specific setbacks, such as attempts to restrain free access to information of public importance and the naming of a director of the country’s Anti-Corruption Agency linked to the ruling Serbian Progressive Party.

Bosnia and Herzegovina, which occupied the same place as Albania in both years, is a “clear case of stagnation”, with no real change over the past 10 years, she noted. “It’s one of those countries that take one step forward and two steps back,” Abel said.

Of all the Balkan countries, Macedonia had the sharpest drop – from 90th position in 2016 to 107 in 2017 – but Abel attributed this fall to shock revelations of corruption under former Prime Minister Nikola Gruevski.

“Luckily, Gruevski did not get into power again and there is a lot of hope in the new government,” she noted.

“Talking about improvement, [it] doesn’t quite match the high level of corruption perceived in all of the different surveys that our partners in Kosovo carried out recently,” she said.

As for Bulgaria, there is no “effective anti-corruption structure”, as the long-awaited law against corruption failed to deliver results, Abel added.

She said that in Croatia, which kept almost the same slot – dropping only from 55th to 57th place – problems have worsened with a sharp turn to the political right.

According to Abel, this has been accompanied by the weakening of independent institutions and civil society organisations, and Croatia’s CPI worsened since it entered the European Union in 2013.

Montenegro remains the only country that made no improvement, even statistically, staying at 64th place in the rankings; Abel said that the 2016 alleged coup attempt “stopped anti-corruption efforts to some extent”.

Romania, which fell from 57th to 59th place in the rankings, stands out for last year’s mass protests against corruption, as well as for its combative anti-graft prosecution, headed by chief prosecutor Laura Kovesi.

“The ultimate goal is to have citizens interested in keeping watch of their own government and institutions,” Abel said.

However, she warned that it is not enough for only one institution to do its job, but the “whole system”.

Another thing that Transparency International noted is the link between corruption and freedom of the press and civil society.

Abel cited the data from the Committee to Protect Journalists, saying that 368 journalists died while pursuing stories in 2012, and 96 percent of those deaths were in countries whose CPIs are lower than 45.

She says that Transparency has noted “more crackdowns on journalists and increasing pressure on civil society” in many Eastern European countries.

“This … adds to an environment in which corrupt officials, shady businessmen and organized crime figures are able to act with impunity, because independent oversight is missing,” she concluded.